Today I bagged a 1927 Remington Model 12 typewriter, but where exactly I’m not telling. The sourcing of good antique machines can be very challenging in a small place like Manila and sometimes we have to be circumspect about revealing our sources.

That said, I have to say typewriter after saying Remington Standard Model 12 because if you key that into Google you’ll likely trigger pictures of a pump-action .22 rimfire rifle. It’s no surprise either because in 1837 Mr. Sholes, the inventor of the QWERTY typewriter, sold his share of the typewriter invention to E. Remington and Sons, later to become the gun, typewriter, and sewing machine manufacturer.

The Remington Model 12 is a big black typewriter that looks exactly like you’d imagined the typewriters of old. It has the characteristic iron cube shape and weighs like a safe of the same material. A nice touch to the machine though are the Rube Goldergian twistings of chrome steel around the area of the carriage, and the glass topped ring keys in front. If you’re even a little bit into Dieselpunk or Steampunk, this machine will appeal to you.

1927. It helps if you’ll transport yourself in your mind’s eye to that year in our history. It was the year Charles Lindberg made the first successful solo trans-Atlantic flight from New York City to Paris, France. It was a remarkable achievement considering one out of two pilots who attempted that at the time died in the attempt. 1927 was also the year the 4 faces were carved into Mt. Rushmore, and the year the Ford Model A was launched. Josef Stalin, whom by some estimates was responsible for the deaths of as high as 20 million, began his dictatorship which would last till 1952. No, not everything was bright and optimistic in 1927.

What about Manila, what was going on in Manila. 1927 was smack in the middle of the American colonial period. Here’s a picture of the Philippine General Hospital at the time, from John Tewell’s collection on Flickr: 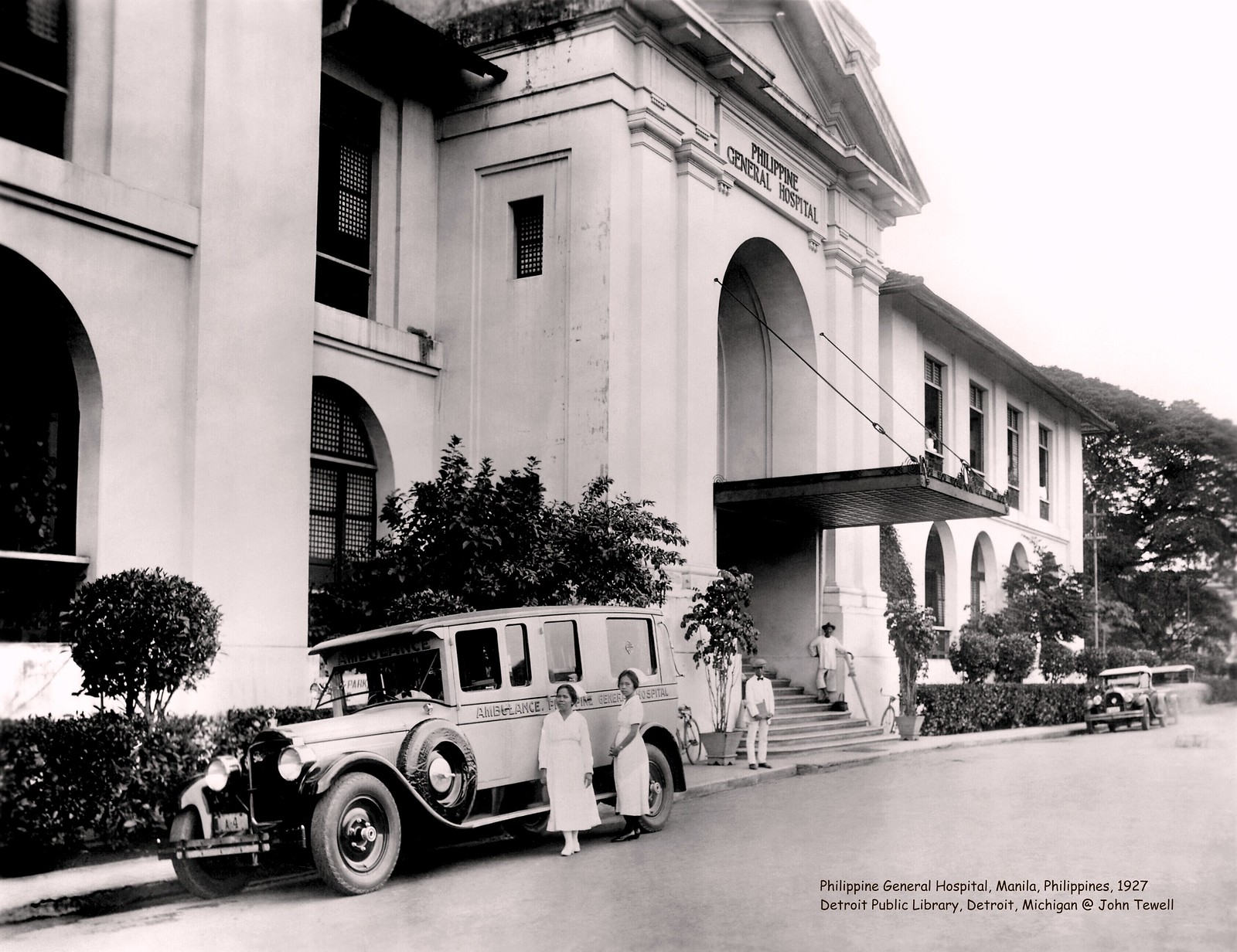 Here below is the Remington Standard Model 12. It works. It does need some cleaning, oiling, and a change of ribbon, but it works. I’m looking forward to writing a thing or two on the machine, by way of making it feel more at home here in the Philippines. Mabuhay, machine!

It’s arrived! I was advised to pick up my shipment of new typewriters at my convenience and did just that last Sunday afternoon. I figured it would be the have the least traffic of any time of the week and I was right. The traffic was not light, but it was not the usual horrendous traffic that typifies Manila. And besides, the destination pickup point was all the way to Pasig. Into the narrow, unfamiliar streets of Pasig. But never mind. Thanks to Google Maps and Waze (Waze by the way get confused and gives ridiculous directional advice. Then again, that happens to Google maps too but not as often.

So without further ado, the pictures!

I haven’t fiddled with the machine yet. Just opened it. And researched a bit on it’s history. How old is it? How does it feel? Does it type well? Tomorrow, we will find out more about this machine.

I attended Wordcamp Manila 2018 yesterday at the iAcademy in Yakal, Makati and it was fun. Overall, a valiant effort by a growing body of WordPress users representing a cross-section of the different kinds of people who use WordPress whether as end-user such as bloggers and seller sites, or as back-end, those involved in the programming and functionality.

As a blogger, I made the most of the event by trying to find front-end users like myself. Where I could, I also spoke with programmers who expressed themselves fluently, contrary to the expectations of a female presenter who portrayed techies as introverted and uncommunicative. She actually introduced the first techie guest speaker as being “makapal ang mukha” because he liked to give talks. Tsk, tsk, not even in jest, ma’am.

I was very fortunate because I found someone who was a seasoned blogger with extensive programming experience in the WordPress. While it would certainly have worked against me had I chosen to see myself marginalized as a “beginner” or a “superbeginner” as so crassly phrased by one of the presenters, I saw this as an opportunity to find ways to improve on the blog (this blog!) and to also connect with other existing or would-be bloggers.

Getting back to the chap I met, I expressed to him my passion for collecting antique typewriters to which he responded by saying he had one back home in Davao himself. Naturally he asked the next logical question when it comes to the declaration of collecting typewriters: “What do you do with them?” After going into the acquisition and restoration aspects which are large parts of the hobby. I got into what one does with a typewriter.

I explained that personally, I had found typewriters a boon to my writing for certain reasons.

One, typewriters are singular in their function. They are designed to type, that is, to write. Certainly you could get creative with the use of a typewriter, and maybe get it to do what you want it to do, but that is strictly not what typewriters were designed for.

Then there’s the idiosyncrasies of an old typewriters. You will discover, whether to your dismay or delight, that old typewriters are somewhat like old people. They develop their own quirks. Quirks like the way they like their keys punch, the speed at which you can punch the keys, letters that tend to stick, returns that don’t fully go back or have to be nudged back a bit, and such. These quirks may get on your nerves, or depending on your mindset, become the character marks of your machine. Unless the quirk gets in the way of your writing, you learn early on to take these hiccups in stride, and learn to Tango with your writer’s friend.

Tom Hanks, now made more famous to typewriter collection enthusiasts by his admission to having a collection of over 200 machines, spoke of the qualities of sound made by typewriters. Some go “thak!” with the sharp authority of a micro sound barrier breaking as the supersonic slug hits the platen, while other might go with a more genteel “thuuk” yet able to produce just as clear an imprint. I have one, a Remington Noiseless standard from the 50s, that when I use, I have to look up from time to time to see if the machine really typing. Most of the sound it makes comes from the linkages, not so much from impacting the platen.

These sounds are the audible feedback that signal to you that you have reached the kind of rhythmic speed that your typewriter likes. It becomes part of the hypnotic loop, the writing experience. Just that sound, the ticking of the clock on the wall perhaps, or some heart-broken Sinatra crooning in the background. And the writing flows, punctuated re-gularly by you reaching for the return lever to reveal yet another line of the page.

And I don’t correct much on typewriters. I repress the urge to retype, to respell, to correct. Instead I skip over and continue writing. A pencil nearby helps me cross out the portions deleted, but I write to write and not to make a final product. Editing is a lot easier for me than producing the creative work and as such, the typewriter has turned into a tool for releasing the powers of creation.

I probably would have gone on with even more things I liked about collecting typewriters, but our seminar speakers had arrived and it was time to get Wordcamp Manila 2018 on the road.

P.S. The Wordcamp Manila 2018 came to resounding close with food, drinks, and song at Centerstage KTV at Jupiter Street that evening, a fitting end to a commendable effort to reach out to all people who in one way or another work with WordPress. Despite the hiccups (remember, baby steps, baby steps), I rate this event a success and definitely look forward to joining next years, armed with better WordPress skills and a much improved blog. Or blogs. Hopefully the latter.

There’s a recently restored 1946 Underwood Champion sitting quietly beside me and I’m basking in its satisfying presence. I mean, you know how much trouble it entails to restore these babies, yes? So this one’s done and I’m going to enjoy it for all its worth. Red hails from Olongapo City, where Subic, the 262 square mile American naval base was located. It is likely Red came through there. Note: the base is still there but has gone civilian.

I have just finished the restoration of a 1928 Underwood Five and am very happy with its appearance. When I look at the typewriter market out there I can easily find two other

U5s for sale, one at 9250 Pesos and another at 8000 Pesos. While those unit are the same as the one I have, I cannot seriously consider acquiring them with the idea of restoring them. Because their selling price is so high, it leaves me with no room to improve them because the restoration of good typewriters costs.

This is where some antique typewriter sellers make a mistake. They imagine that because the unit they have in their hands is an antique, they price it any way they like without taking into consideration the condition of their unit and the price ceilings that the market will impose of the product they are selling; mind you those price limits exist. When typewriters are priced too high by their owners, the only hope they have of selling their units is if an uninformed buyer with money to burn turns up and buys sight unseen.

Of course, you do not want to be that “uninformed buyer.” You want to be a smart buyer and how does one become that?

Hang Around. Without insider information or without having to consult people, the simplest way to become informed is to hang around. Hang around the Facebook market

sites for what is being sold and for how much. While there will always be the outliers who price too high, the majority will price more uniformly. (Yes, what your statistics teacher taught at school actually applies in the real world. Finally!) You will know the outliers by their exorbitant pricing and by the fact that their product stays on sale for long periods of time compared to the rest of the market. Their attractive products just stay there, unmoving. Take note of those.

Take Notes. The other thing you want to take note of are “new” postings that disappear almost as quickly as they appear. That’s an oxymoron, I know, but that really is what happens. Good products that are priced very reasonably (or more directly: low) will immediately be snapped up. They can be serviced, upgraded, and retailed at a good profit margin.

More later, on the question of “Should I insist on a mint machine or should I be happy with a restoration?”